This short video touches upon the tools one can use while learning to play Indian Classical music.
Song meaning of ‘Chhumchananana’ (The sound of Her Anklets) –  used as an example of the learning/teaching process.  Lead by Shree Rani Madalsa, Canadian singer/song writer Laura Cram (MADALSA) talks about  how she practises using various tools to aid her in the process of learning and sharing her lessons.  Indian classical music can be learned individually in one’s home, while developing an understanding an appreciation of it’s depth.  Filming by Marilyn Tagoona – Produced by Forever One Productions Copyright 2009 – Downloads for personal use only

HOME VIDEO – ‘CKJi Tunes Surmandal for Shree Rani Madalsa’ – Gifted to Madalsa on Dec. 17th, 2008 from her Indian Classical Music teacher Pandit Chandrakant Kapileshwari, this world traveled surmandal (customized autoharp) has been played in many a concert by the hands of the master himself.

There is an interesting story behind this special 36 year old harp, and it goes as such:
“… On another occasion in London, in 1972, the world famous ‘Beatle’ Sir George Harrison, accompanied by Pandit Ravi Shankar and Ustad Allah Rakha attended one of Chandrakant’s concerts.  George Harrison was very much impressed by Chandrakant’s performance, and took a special liking to the popular composition, composed by Chandrakant in raag Hamsdhwani called *’Rangilo Mahi Sajanawaa’ (meaning – My beloved, you are so romantic and colorful).  It is interesting to note that in fact George liked this song so much he requested Chandrakant to sing it again, and yet for some reason Chandrakant’s Indian ‘surmaadal’ (auto harp) kept going out of tune.  During the intermission, there was a mysterious disappearance of George Harrison’s secretary, only to reappear at the end of the concert, where George Harrison graciously and with appreciation for CKJi’s performance, presented a brand new, German, top quality ‘surmandal.” – Excerpts from Forever One Productions ‘The Musical Journey – A Biography of Chandrakant Kapileshwari’.

Copyright 2008 – Forever One Productions – Downloads for personal use only.

3.  Sample of Bhajan practice with MADALSA:

Every Sunday night we try to get together and practice – Shyam Saria Bhajans (Hindi Devotional songs for Meditators/Yogis) … My daughter Terra (Rachna) often joins us … She is filming this one. 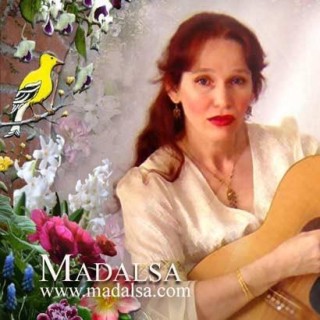